In 2017, Cam-Dex Security Corporation was pleased to celebrate its 60th anniversary of providing businesses and organizations with top-notch security solutions.

Cam-Dex began in 1957 as Regiscope of Kansas City, selling and servicing security cameras to grocery stores and banks to catch offenders who wrote bad checks. With previous business experience and extensive expertise in banking, sales, and service, Don & Fern Hull opened Regiscope after responding to its advertisement for franchisees.

The original home of Cam-Dex was the 6th floor of the Livestock Exchange Building in Kansas City. Many of the Hulls’ original customers were banks and grocery stores – Safeway, Milgram’s, and A & P Food stores were all early adapters of Regiscope security cameras. The franchise also had a number of customers that were independently owned grocery stores marketing under the names of United Supers, IGA, and Thriftway.

In 1967 the Hulls incorporated their company. At that time the company was renamed Cam-Dex Corporation. “Cam” referred to camera and “Dex” was selected because the company indexed and stored large quantities of 16 mm film that was generated when photographs were taken.

By 1969 the Hulls had grown Cam-Dex into a very successful business. Fern Hull’s nephew, Jack Krumme purchased the company in April of that year, assuming all executive leadership roles at that time. He continued to lead the company as CEO until June 1993 and then as Chairman of the Board for many years prior to his death in 2016. 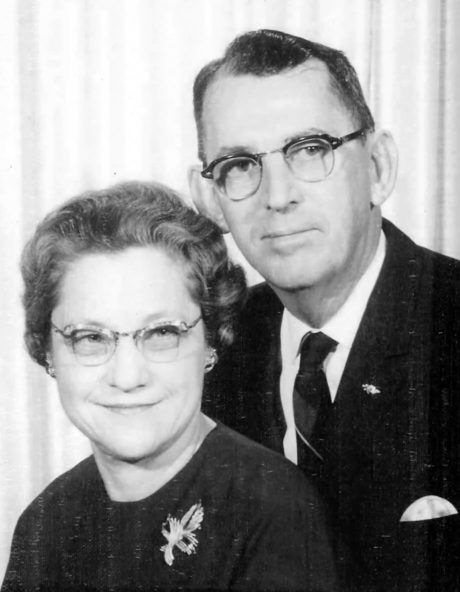 During the 1980s and 90s, Cam-Dex continued to lead the way in the security field with its commitment to supplying its customers with the most advanced security solutions available along with the use of microfilm. Jack Krumme also expanded Cam-Dex sales and service into the area of Access Control security systems during the 1990s.

Jack’s son, John Krumme, began his career at Cam-Dex in April 1980 upon completion of active duty military service. He moved to St. Louis in July 1980 and opened the company’s St. Louis office. He was named Vice President in the early 1980s and led the St. Louis branch until June 1993 when he and his family moved to Kansas City and he was named President and CEO. He continues in that role today.

The phasing out of microfilm use in 2004-05 led the security industry into the digital world – with network video recording systems eventually evolving into now IP-based security systems. With the ongoing advancement of digital and cloud-based technology, Cam-Dex now offers a variety of custom integrated security solutions to government, higher education, healthcare, industry, and commercial property management organizations in the United States and worldwide.

The Krumme family will continue to play an active role in the company’s success for years to come. Dan Krumme, John Krumme’s son, joined the company in 2013 as the St. Louis branch Operations Manager, and was promoted to Vice President of Cam-Dex in 2016. As a fourth generation Cam-Dex family member, Dan is committed to the company’s growth and vision to offer state-of-the-art custom integrated security solutions and service to its customers.